ECTO-DETECT-O was a project created in the Abertay Game Development Society’s first game jam. The jam lasted a total of 20 hours.
You can download both the Jam version and the Updated version on my itch.io page.

Once the jam was over I decided to polish and improve on the initial build. 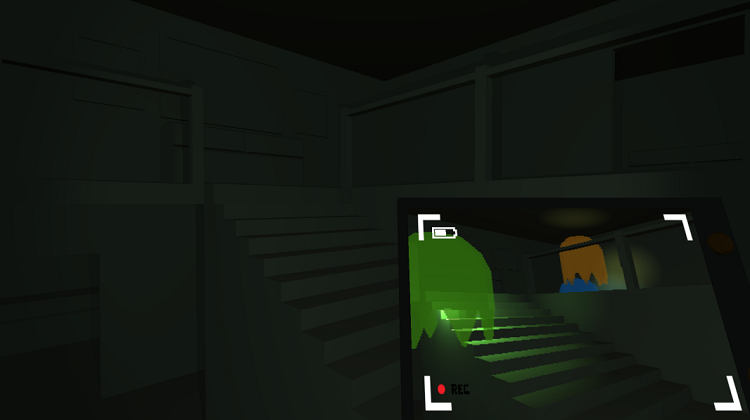 The Jam
For this jam I decided to go solo so I was restricted with the amount of content I could create in 20 hours.
The theme for the jam was “Is It Broken?” and as it was October I decided to go for a ghost-hunting adventure with broken technology. The idea was that you had three devices that could detect ghosts and occasionally they would glitch out and require you to slap the device to reset them.

To make things achievable in 20 hours, the game was created using Unity 5 with some quick assets made in Maya 2016.

The three devices were split to have three different functions;
– Pointing towards the closest ghost (SEEKER)
– Transcribing the ghost’s words (EAVES-DROPPER)
– Seeing the ghosts (CAMERA)

Only one device could be used at a time, but the Camera device was too powerful and the other devices were left redundant.
To have a goal in the game, a ‘photo’ function was added that encouraged the player to take photos of ghosts using the Camera, with an increase in score for each successful photo taken, and a bonus score if the ghost was the randomly assigned ‘target’ ghost.

Overall I’m proud of what I achieved working solo with such a short time limit, but there’s a lot of room for improvement.

Post-Jam
The main focus post-Jam was polishing the game into a more presentable state as I didn’t really like how I’d left it.

For starters, the devices were updated to have batteries so overuse can drain the battery and switch the device off. Battery pickups were added to allow for recharging.
Tweaks were made to things like the glitching to make it more obvious the device was broken. For example, the Camera no longer flipped upside-down and instead was replaced with white noise/static to indicate something was wrong.

The ghosts now only appeared in the Camera if the player was nearby and if they were holding the key item the ghost wanted, in an attempt to encourage the player to use the other devices. This didn’t really work and the Camera is still too powerful, but not as powerful as before.

Finally, a title screen and a win condition were added to tidy up the loose ends.

Overall, I had a lot of fun! The Jam helped me to focus on the key mechanics, with other elements being easy to add in during polish. ECTO-DETECT-O still has room for improvement, but I’m proud of what I’ve done with it for now.